Eat.ly: An Experiment In Mindful Eating

I love a good side project. Most of my projects don’t work out, but sometimes they do. Side hustles are opportunities to flex the creative muscles and should be encouraged. Tinkering is underrated.

Eat.ly was one of the more successful side projects I have worked on – most of the credit goes to the amazing team we had in place. Eat.ly ended up being acquired by Foodspotting (later itself acquired by OpenTable) and received numerous press mention, including appearances in The 4-Hour Body by Tim Ferriss, Esquire Magazine and TechCrunch.

The original idea was one I came up with while attending at TedX Conference: if people took the time to pause before they ate, it might lead them to healthier and more mindful eating. Keep in mind, this insight around mindfulness was prior to meditation apps like Calm and Headspace becoming mainstream.

Mike Singleton, Eric Friedman, Sam Brown and myself had met through a mutual friend and we began to get excited about the concept.  Each of us drew on unique operating experience and became fast friends, even with Sam Brown was living in the UK.

So we banded together to create a web service we all wanted and called it Eat.ly – a quick way to track and share food photos on the web via email.

The core idea was based on the observation that most people can’t remember what they had for lunch two days ago. However, stopping to take a photo (and optionally sharing it publicly) adds both accountability and an element of fun. It also fit well into the burgeoning “quantified self” movement, i.e., tracking oneself to see patterns, develop better habits and create greater personal accountability.

Here’s a video of us presenting at a New York Quantified Self meetup:

Eat.ly started to take off but faced a common challenge in side project: finding the time while balancing full time roles. In fact, the rest of the team was employed by one of my favorite companies of all time, and NYC’s hottest startup at the time. As a result, we were not giving Eat.ly the love it deserved, despite a growing global community of mindful foodies.

It also wasn’t totally clear to us what direction the community wanted to take the product. At one point we even allowed community members to vote on how the product should evolve. Suggestions included: “Hunch for Food” or offering a white label product for other communities based on photo sharing.

Ultimately we decided FoodSpotting would be the best steward for our product’s future. Foodspotting had venture money, passionate founders and a clear vision.

I’m super proud of what we accomplished in a short period of time and the friendships the project led to.

Ultimately Eat.ly was everything a good side project should be. On to the next one. 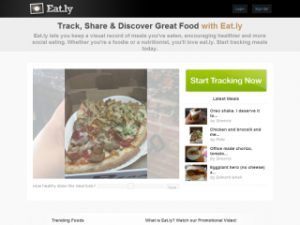 My good friend Mike authored a great post tonight on “behavior generated content.” An all-star cast followed up with great comments (@lessin, @andyweissman, @jonsteinberg, @ericfriedman and others). It’s worth a